Due to the rising Covid-19 case rate, as well as keeping with the latest Lenawee County reponses, the library is encouraging face masks over the nose and mouth of all those who enter the library. The library serves a high risk population, including many who due to age or health conditions, do not have a choice of vaccination. Let's protect each other.

Lina Hansen
Lina Hansen has been a freelance travel journalist, teacher, bellydancer, postal clerk and science communication specialist stranded in the space sector. Numbed by factoid technical texts, she set out to write the stories she loves to read— cozy and romantic mysteries with a  dollop of humour and a magical twist. After living and working in the UK, Lina, her husband, and their feline companions now share a home in the foothills of Castle Frankenstein. Lina is a double Watty Award Winner, Wattpad Star ,and published author with Denver-based indie press, Literary Wanderlust.

Lina will talk about the challenges of cross-continental writing and publishing. She'll explain her motivations for writing witch cozies and take you on a tour to the amazing village of Avebury, Wiltshire, Uk, the setting for her "Magical Misfits" series.  She will also read a passage from her debut novel, In My Attic, the first in the Magical Misfits series.

Shawn Sturgeon
Shawn Sturgeon was born in Western Nebraska in 1965.  He was educated at the University of Nebraska-Lincoln, the University of North Texas, and the University of Cincinnati, where he received a PhD in English literature in 1998.  Since graduation, he has taught at the Art Academy of Cincinnati, Emory University, Adelphi University, and the Rochester Institute of Technology.  From 2008-2016 he lived in Kosovo and Croatia, working at two of  RIT’s global campuses.  From 2010-2016, he served as Associate Dean for Academic Affairs at RIT-Kosovo and RIT-Croatia.  His first book, Either/Ur, was a finalist for the Independent Publisher Book Awards, The Paris Review Prize and a semi-finalist for the Walt Whitman Award.  He has published over two dozen poems in the Paris Review, as well as poetry in The New Republic, Western Humanities Review, the Southeast Review, Witness and other magazines.  His newest manuscript is titled, The Venus Glass.  He currently lives in Rochester, NY with his wife Samira, where he is Director of Accreditation and Assessment at the Saunders College of Business.

Shawn will read both from his book, Either/Ur, and from the work in progress, The Venus Glass.

Grant Sisk holds a Ph.D. in Modern American Literature from the University of North Texas. He primarily writes short fiction, non-fiction and creative non-fiction. His work has been published in The Colorado Review, Newman Journal of Ideas, New Texas, Iron Horse Literary Review, Travel-live Magazine, Southwestern American Literature and others. In his spare time he enjoys domestic and international travel, working horses, cooking, hunting and in general anything that takes place outdoors or gets him out of the house. He is married and lives just outside of Dallas, Texas.

Grant will read two creative essays, one short and one long. He explains, “The long essay is an elegiac revisiting of my grandparent's old ranch. The short essay is titled ‘Chicken Slayer.’ That should put things in perspective.”

Carman C. Curton consumes caffeine while writing a series of microstories called QuickFics, which she leaves in random places for people to find. You can find her on Twitter and Facebook @CarmanCCurton.  Carman will read a few of her original small stories, called QuickFics, and discuss their origins. As part of her presentation, Dr. Curton will talk about how people can use the events of their own lives to write meaningful and moving stories, and she’ll end with several prompts so listeners can jump start their own writing adventures.

Jessy Randall's poems, comics, and other things have appeared in Asimov's, McSweeney's, and Poetry. She is the author of How to Tell If You Are Human, a collection of diagram poems from Pleiades Press. She is a librarian at Colorado College and her website is http://bit.ly/JessyRandall. She's married to Ross Gresham.

Ross Gresham's stories have appeared in Indiana Review, Mystery Weekly, and Theaker's. He's the author of White Shark, a Jim Hawkins mystery. He's an English professor at the Air Force Academy and his website is https://www.amazon.com/Ross-Gresham/e/B00H7H8VDC .  He's married to Jessy Randall.

James Lough is the editor and author of five books, including Short Flights: Thirty-two Modern Writers Share Aphorisms of Insight, Inspiration, and Wit; Short Circuits: Aphorisms, Fragments, and Literary Anomalies, which won a 2019 Independent Publisher Book Award; and This Ain’t No Holiday Inn: Down and Out at the Chelsea Hotel 1980-1995, which was optioned by Lionsgate/Universal for a TV serial. He is a Professor at the Savannah College of Art and Design.

James Lough offers a writing workshop, complete with a handout you can find on the library website, blissfieldlibrary.org.  Dr. Lough says, "Sometimes we write something and all the parts are there but the work feels flat or shallow. We haven't gotten to the core of it, or maybe we haven't figured out what the piece means to us. Proprioceptive writing is a ‘self-guided exercise that calls forth your imagination, your intellect, and your intuition all at once to open your heart and clear your mind.’”  Dr. Lough has prepared a handout which he mentions in the program and which you can download here.

Blair Oliver is Lead Faculty of Literature and Creative Writing at Front Range Community College in Fort Collins, Colorado, where he's also the Founding Editor of Front Range Review, a literary magazine.  He's the author of a collection of stories, Last Call, and a novel, The Long Slide, co-written with Peter Soliunas.  His work appears regularly in a variety of publications.  Blair will read from a novel-in-progress, one just started in December, as an exploration of process.  He will read the opening chapter, talk a little about the drafting process, comparing the first draft with the reading draft.

E.A. Comiskey is an award-winning fiction writer and nationally syndicated blogger. Her work is broadly described as “speculative fiction” and is often a wild mix of humor, mythology, fantasy, horror, and romance.  She lives in a much-loved, rickety old house in Blissfield, Michigan with her husband, children, and a veritable zoo of creatures. If there’s a festival in the area, you can bet she’s there, most likely drawing on the pavement with chalk. After all, when you live in Michigan, you go outside whenever you get the chance.

E.A. Comiskey will read an excerpt from her Monsters and Mayhem series and speak about the characters and how they came to life for her.  She says, “Writing about elderly adventurers presented a unique set of opportunities and challenges. It’s been a joy to explore their story so far, and I look forward to many more adventures to come.”

Bryan D. Dietrich is the author of nine books of poetry.  His poems have appeared in The New Yorker, The Nation, Poetry, Ploughshares, Prairie Schooner, The Paris Review, and many other journals.  Winner of The Paris Review Prize and a Nation Award, nominee for both the Bram Stoker Award and the Pulitzer, Dr. Dietrich is a Professor of English at Newman University.  Bryan D. Dietrich will read from a selection of his work.

MM Carrigan is a writer from the Baltimore area whose work has appeared in Eater, The Rumpus, Literary Hub, PopMatters, and more. They are the editor and founder of Taco Bell Quarterly. You can follow them on Twitter at @thesurfingpizza and @TBQuarterly.

Carrigan will reveal all of the secrets to writing and publishing. Carrigan says, “We want to inspire writers to live mas, write mas, and dream mas. Is the best way to arrange your writing space with lucky troll dolls? How can you be one of the fancy writers with a flashy platform if you're nervous and awkward? Where DO they even keep The Paris Review in a Barnes and Noble? We will journey first hand into dark-cobwebbed corners of the writing life where no one dares to go.” 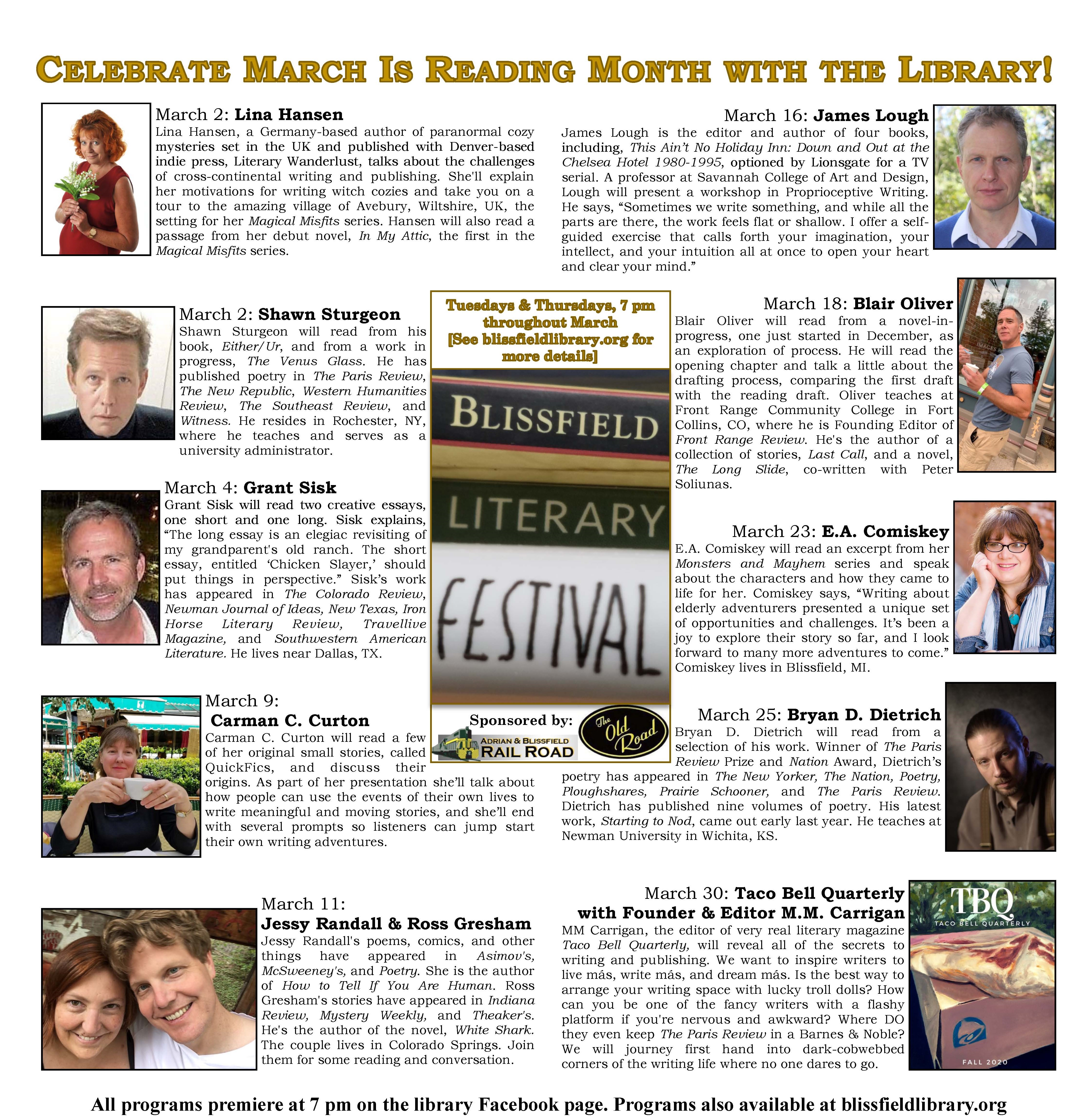